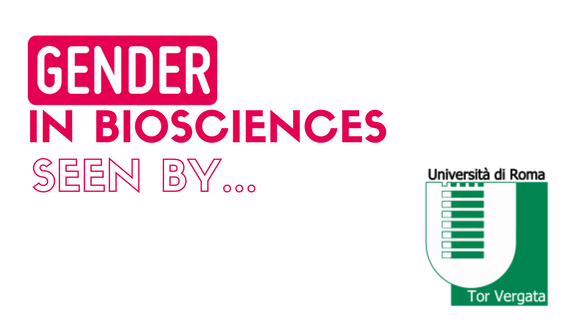 Elena Bachiddu – Member of the Department of Biology at the University of Rome “Tor Vergata”. She works in communication, event organization and on the website of the Department. She is a cultural anthropologist and teaches ‘Health and Safety at Work’ for “Didactics of Science” courses, the theoretical-practical modules annually organized by the Department to promote and disseminate scientific knowledge among students of first and second grade schools.

Elena Bachiddu is also a member of the Central Advocacy and Control Committee (CUG-Comitato Unico di Garanzia), where she coordinated Work-Life Balance seminars and publications.

1. How do you understand “Gender” in biosciences research?

Broadly based and explored in the field of Gender Studies theory, the discourse on ‘gender difference’ is emerging nowadays in Italy in the biomedical disciplines where it is understood as closely related to the guidelines of personalized medicine and no longer as limited to the sphere of reproductive health of woman.

Consequently, Gender Medicine, starting from research and biomedical experimentation and pre-clinical studies, appears as an area that currently recognizes and examines the sex and the feminine difference. In this sense research and experimentation approaches are oriented within several pharmacological research projects and research institutes, training of medical specializations, hospitalization procedures in the local healthcare facilities and healthcare policies.

However, in general terms, we must remember that, according to the Global Gender Gap Report presented at the World Economic Forum, Italy still ranks 50th as for women participation in the labor market and for economic opportunities, and in particular according to recent National University Council  (CUN)  data, women in various university career levels are still heavily underrepresented. It is therefore decisive to increase projects and positive actions aimed at improving this situation.

Among the strategic objectives identified by the Starbios2 project, with the aim of modernizing research institutions and to promote a sustainable development, Gender plays a central role, both from an epistemological point of view – as in the various research perspectives in the field of biosciences it is possible to consider sex key variable and gender differences in biological processes – and from the point of view of equality plans in career paths and work organization. Both perspectives are very important for teaching and in the training of new researchers.

2. What are the current standards and actions to achieve better Gender equality in Tor Vergata University and in Italy in general?

Currently within our University there is a Central Advocacy and Control Committee (CUG-Comitato Unico di Garanzia), dedicated to gender equality, which promotes equality culture, vigilance on procedures and regulations on work-life balance and equality plans for all professional roles in the university, including students. From the point of view of training and research, there are workshops on gender oriented studies in humanities, literary and linguistic studies.

Furthermore the University Commission for Sustainable Development identified the objective n.ro 5, UN Agenda 2030 – gender equality and women empowerment – as one of the main areas of its activity. However, the current gender equality standards in our University appear to be insufficient both within the STEM (Science, technology, engineering and mathematics) and the humanities.  Therefore we need a dissemination action to raise awareness on the current differences among women and men in carriers and decision making and on gender models in research activity at the department, macro-area and university levels to make transparent gender biases and inequalities in scientific carriers.

Stakeholder engagement on these issues is gradual and addresses the need to overcome skepticism about the possibilities of change and difficulties in deeply understanding the theme.

3. What are you aiming for with the implementation of the STARBIOS2 actions towards better Gender equality for the Department of Biology at the University of Tor Vergata?

First of all, the activity of our working group is aimed at increasing the perception of gender model in science at the Department and at the macroarea level. The activity stream has been focused on the cultural, organisational and institutional factors hindering women’s careers within the department as well as the university as a whole. This is the first necessary step in order to produce changes in norms, values or culture towards gender oriented practices. Supporting women’s careers and reinforcing the use of gender and sex as key variables in the research programmes are our ultimate goals within the Department and the whole University.

4. What kind of actions are you going to establish to fulfill your objectives?

The first step has been collecting information about women’s situation within the Department and their needs in terms of services and training support. This was done through a consultation of the women and men working in the Department of Biology, through interviews and meetings.  It is necessary to win resistance, so we are using individual interviews to further mutual understanding, to increase interest and awareness before dissemination. In a second phase we will proceed to collect data through quantitative survey, online anonymised questionnaire and qualitative face to face interviews.

At the same time a set of negotiation activities has already been activated, including both public hearings or events and direct contacts with the concerned university units (human resources department, deans, heads of department, CUG, etc.) and others scientific disciplines researchers, in order to share goals and proposals. Among them we are planning the development of gender indicators concerning the evaluation system of the Italian universities to propose to the National University Council and relevant national government bodies.

To attain the objective of supporting women’s careers, the activity stream of the working group is also addressed to develop a set of policy recommendations for the department and university level focused on new procedures for supporting the access of women to leadership positions. A set of recommendations will be carried out to make transparent gender biases and inequalities in scientific carriers and a seminar will be devoted to the presentation and discussion of the recommendations.

Last June a seminar devoted to gender bioresearch took place; it showed examples of gender oriented research; materials and results from other scientific Italian contexts were provided to demonstrate the utility and the possibility of gender-oriented research. The aim was to launch new possible gender sensitive research projects and to share it with the researchers of our Department in order to produce a real change in research approaches.

5. Who is involved, from Tor Vergata Roma University, in the action plan, in order to complete your final objective?

The Research Group on Immunology and Pathology of the Department of Biology is the coordinator of the project. The group is lead by Vittorio Colizzi and is composed by Carla Montesano, Antonella Minutolo and Marina Potestà. They compose the Core Team of the project together with professionals from other research fields and technical teams (Stefano Ciccone, Elena Bachiddu, Daniele Mezzana, Andrea Declich, Ivana Matic).

The core team has also collaborated with university bodies such as the CUG, and with researchers from other disciplines, student and trade organizations.