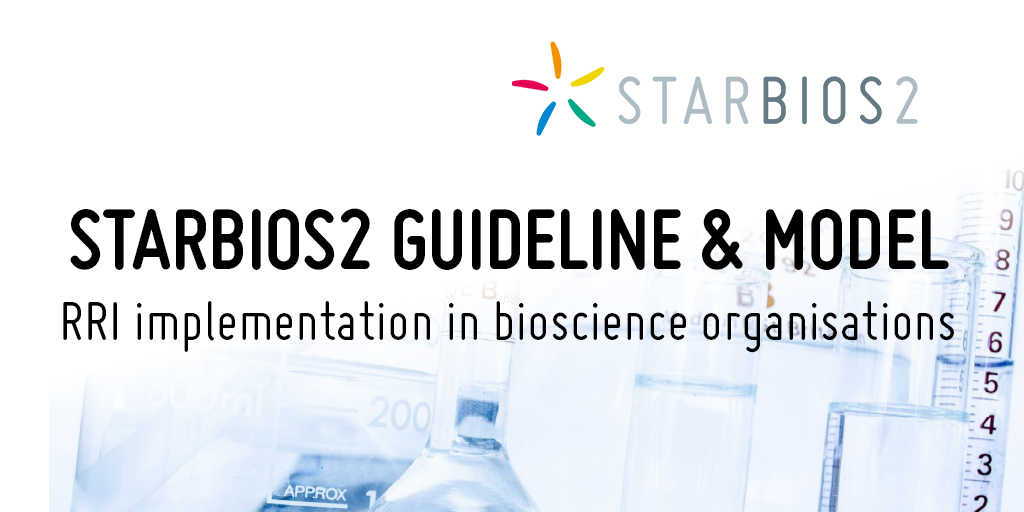 The STARBIOS2 project has developed a model and guideline aiming to promote the practice of Responsible Research and Innovation (RRI) in bioscience research organisations. The model was developed through an iterative process: Six European institutions in the bioscience sector have designed and implemented action plans to achieve RRI structural change in their own organisations. The implementation was part of a learning process, where the action plans generated new practical knowledge, that was fed back to amplify the structural change. Through his iterative learning process, STARBIOS2 partners have developed a model that we are now able to share with anyone who is interested in promoting responsible biosciences!

The guideline document represents one of the outputs of the STARBIOS2 project. The model builds on work carried out by the University of Rome Tor Vergata (Italy) that coordinated the work, Oxford University (United Kingdom), Agrobioinstitute (Bulgaria), University of Primorska (Slovenia), University of Gdansk (Poland), and University of Bremen (Germany). The teams received technical assistance from The Laboratory of Citizenship Science (Italy) Aarhus University (Denmark), Uppsala University (Sweden). The development of our model also included exchanges with experts outside the consortium, analysis of literature and documentation on similar experiences.

The project is now in its final phase, where six non-European partners will use the learnings so far to implement action plans for structural change: Funcacao Oswaldo Cruz in Brazil, the International Centre for Genetic Engineering and Biotechnology (ICGEB) in South Africa, and the University System of Maryland, in the United States of America.