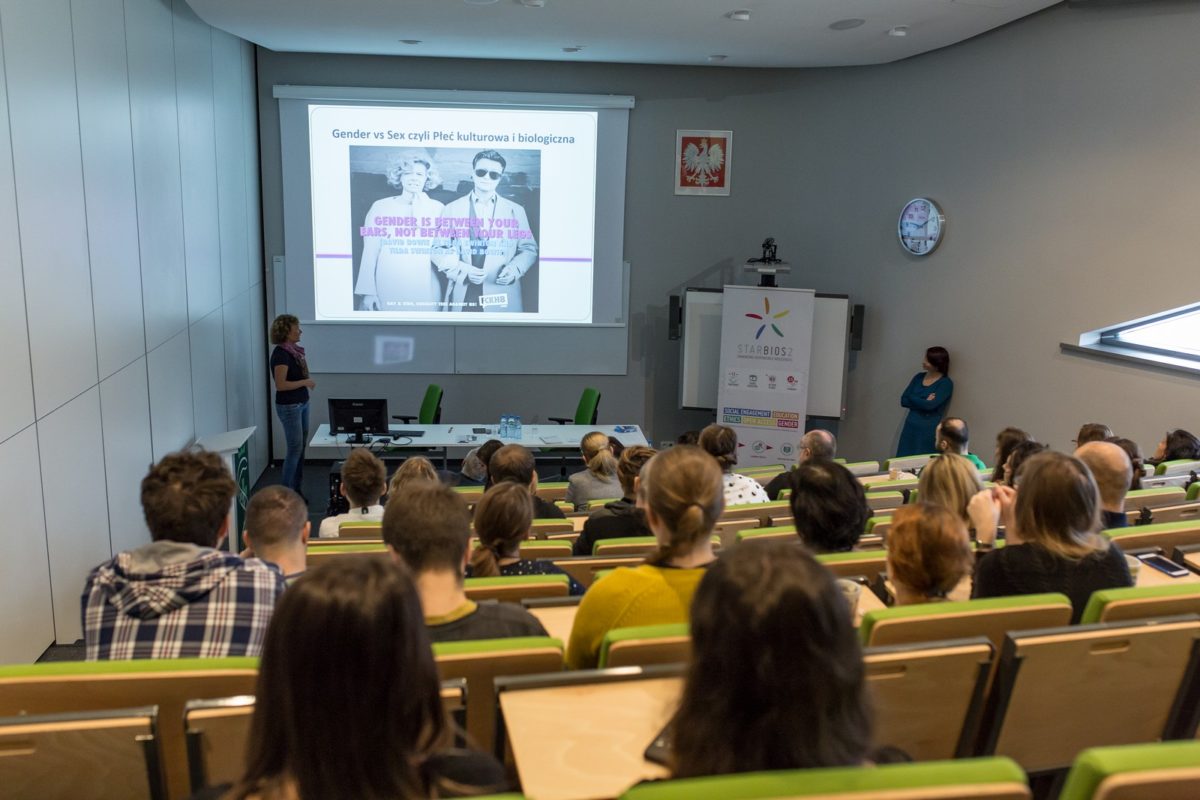 The University of Gdansk started their STARBIOS2 journey with a set of pilot actions, already planned for bigger things. Deciding to focus on the RRI key of gender, they managed to obtain structural changes on the institution-wide level with united efforts of a complex project team consisting of members of different faculties and units passionate about introducing long-term changes.

For all key areas of RRI, including gender, the main challenges arose from the fact that STARBIOS2 activities at the University of Gdańsk (UG) were planned as pilot actions for the Intercollegiate Faculty of Biotechnology of University of Gdańsk and the Medical University of Gdańsk (IFB). With the aim to test internally, and later on transmit these actions as a trigger for change to other bioscience-related faculties, and even further onto the university wide-level.

Our focus on gender was intersectional as it overlaps with other important roles women and men undertake. We considered gender of the researcher, student, the management level in the institution and role-models.

This meant we investigated the needs for support in career development. We also considered the number of male and female staff at IFB, and the different obstacles to research careers that might result from gender stereotypes. We stressed the fact that teaching curricula should be designed so as to give equal chances for both men and women. This includes developing an understanding of the meaning of tailored training in leadership skills. In addition, we promoted role models of both male and female scientists, showing researchers that a good work-life balance has a positive effect on facilitating gender equality in institutions.

The obstacles, which occurred throughout the process of implementing actions at UG, were to some extent connected with gender stereotypes that influence the concepts of what men/women should and should not do, and that also have a strong effect on leadership structure. To reduce the impact of these stereotypes on the career development, management structure, or studying path, STARBIOS2 team experts provided  recommendations for the UG authorities to introduce diversity management training for administration and scientific staff, and to facilitate gender equality plan in the institution.

Certain planned actions at UG focusing on gender concerned developing specific actions targeted at advancing career possibilities for women researchers. The actions included, among other things, investigating the needs for support in career development and taking into account the gender perspective. A series of interviews were conducted with the researchers at IFB. Based on this, our team of experts from Social Science Faculty formulated recommendations and provided training and career development tools for both women and men. A “Gender gap in biotechnology” report was published and presented on several conferences throughout Europe and in Canada. Two workshops were conducted on managing diverse teams and self-presentation in respect of gender at IFB. These events were successful, and we repeated them during the Biotechnology Summer School and at the Universities of Bremen and Lviv. We also “showcased” successful stories of women researchers in bioscience during invited lectures and seminars.

Contribution of the particular actions taken within the scope of gender have been visible and caused tangible institutional changes. Several of the activities developed resulted in the appointment by UG Rector of a Committee for implementing policy of social responsibility; introduction of obligatory on-line RRI training for UG staff, researchers and students; building networks with other universities sharing good practices; opening a kindergarten for UG staff and student as a tool of strengthening career planning support.

Our vision is to sustain the changes and processes that have been triggered by the STARBIOS2 project in the University of Gdańsk. One of the positive outcome which has resulted from the actions taken throughout the project was not foreseen initially in the development of  the action plans, but evolved as a result of the process of discussions and negotiations: namely the establishment of a formalized university-wide working Committee. The establishing of such a legitimated body has been discussed with the university authorities and will serve as a vehicle for the sustainability of our RRI actions.

The Committee has agreed on working towards promoting University of Gdańsk as a young, innovative institution aspiring to the status of a leader of structural changes in the organisation in the field of Social Responsibility of Universities. In addition, it will be promoted as a model university applying good practices and introducing the standards of gender equality plans’ policy promoted by the EU as a distinction on the national arena among universities in Poland.

STARBIOS2 actions are a strong and potentially influential attempt to facilitate a structural change and build an environment that will be known as an open place, where diversity and equal chances for both women and men are important values.

Implementing gender focused activities in order to obtain structural changes on the institution-wide level was possible due to the united efforts of a complex project team consisting of members of different UG faculties and units passionate about introducing long-term changes.